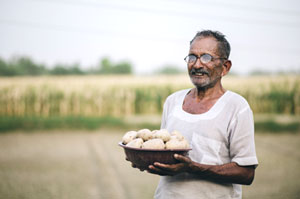 Tata Chemicals Society for Rural Development (TCSRD) has been involved in improving land productivity by introducing new agriculture technology and high-yielding crops for enhancing income of farmers. In Uttar Pradesh, TCSRD has worked extensively on land reclamation through laser leveling and deep ploughing, and making barren land arable. TCSRD also promoted new agriculture practices that have helped in reducing the input cost of farming yet resulted in higher production.

Ram Pal Singh is a farmer hailing from the village of Ahlamai in the district of Farrukhabad in Uttar Pradesh. He has been cultivating potatoes by traditional methods since the last two decades. Due to the poor soil quality, the production of potatoes used to be low, resulting in low return on investment.

Ram Pal says, “The high cultivation cost and constant downfall in yield worried me. I consulted a TCSRD representative, who suggested the adoption of modern agricultural technology to improve the productivity of the land. I adopted the package of practices recommended by TCSRD, which included soil testing, reduction in the use of urea and DAP, introduction of micro nutrients in the soil, laser levelling and deep ploughing of the land.”

The adoption of soil levelling helped in the reduction of the irrigation cost. Last year, the production of potato on Ram Pal’s land increased to 130 quintals / acre as compared to just 110 in the previous years. In 2017-18, Ram Pal cultivated potato on four acres of land and earned a sizeable profit. From the earnings of the potato crop, he repaid his agricultural loan and invested in the next crop production. This worked as an eye-opener for Ram Pal, and he is now an ambassador of new agricultural practices for other farmers of the area.