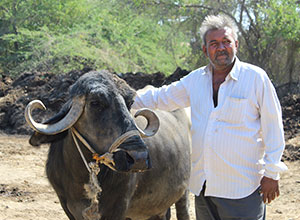 The area of Dwarka-Gujarat is known as a religious place, attracting tourists from different parts of the world. However, the Dwarka region records the minimum level of rainfall as compared to other parts of the state, limiting the options for livelihood. This means animal husbandry is one of the few ways in which income can be earned in this region.

Mr. Virabhai Ahir, a resident of Korada, owns five acres of land, as well as seven Jafrabadi breed buffalo and one Gir cow. He practised the traditional methods of animal husbandry because that’s what he had learned from his father. Due to lack of knowledge regarding breed improvement and proper insemination, he struggled to breed a good quality calf from the buffaloes he had. 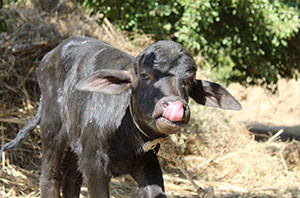 In 2019, Virabhai participated in a village level training of ‘Pashupalan ek Navo Abhigum’ jointly organised by TCSRD and Veterinary Department, Dwarka. During the training Mr. Virabhai came in contact with our Pashupalak Mitra, Mr. Ravi Varotariya and learned about the artificial insemination.

Through TCSRD’s breed improvement programme, Mr. Virabhai inseminated his buffalo and Gir cow on subsidy rates. Upon successful insemination, he got an improved breed of buffalo, while he was also given regular vaccination of the calf.

Due to regular health check-ups and vaccinations, Mr. Virabhai not only saved Rs.14,000 annually, with balanced feeding, milk yield also increased by an average of 2 litres/animal, earning him an additional Rs.21,000 per month. This additional income has allowed him to provide better education opportunities for his children.