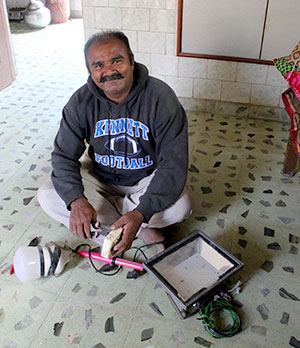 Before Mr. Rameshbhai joined the Affirmative Action programme, he was working as a labourer. However, what he was earning was insufficient to support his family, which includes his wife and four children.

He completed Rural Entrepreneurship Development Programme (REDP) training successfully within 45 days by following all the rules and regulation of Dalit Shakti Kendra. After completion of the technical training, he started working as an electrician in Arambhada village, post which he got a job as an electrician in the Okhamandal Nagar Palika.

REDP training also instilled in him the confidence he needed, in himself and his skills, to put himself out there and take control of his life.

Today, he not only earns Rs.8,500 per month from his Okhamandal Nagar Palika job, he is also an entrepreneur, earning extra income for his family. This income has helped to not only improve their standard of living, but has also allowed him to send his children to school so they can have a bright future.

He also acts as a spokesperson to others belonging to the SC/ST communities, encouraging them to join TCSRD programmes.